The Heritage Emergency Response Initiative (HERI) is an initiative of Ukrainian museum experts that has been set up in response to Russia's aggression and encroachment on Ukraine's national and cultural identity.

Museum workers in neighbouring countries are mobilising to help colleagues in Ukraine amid fears that cultural institutions and their workers will be at particular risk from the Russian invasion.

You can become a part of global resistance. You can help defend Ukraine even if you are hundreds and thousands of kilometers away! Donations are not the only way to help!

For the eighth year in a row, a war has been waged by Russia on Ukraine that began with the occupation of Crimea and parts of Eastern Ukraine.

We call on the world community and colleagues to publicly share their position, we demand to stop the military intervention on the territory of independent sovereign Ukraine!

A play by Ukrainian playwright Neda Nezhdana, directed by French director Clement Peretjatko. By combining different realities and forms of writing, it manifests as intervention, documentary, virtual theater, and medieval mystery all at the same time. The storyline follows the destinies of Ukrainian revolutionaries from the moment when Berkut beat up the protesters to the Russian invasion of Ukraine. ‘Maidan Inferno’ is the first Ukrainian play, written in France, put on stage by French theater, and published in a French publishing house.

6 years ago, the Maidan Museum became a state institution 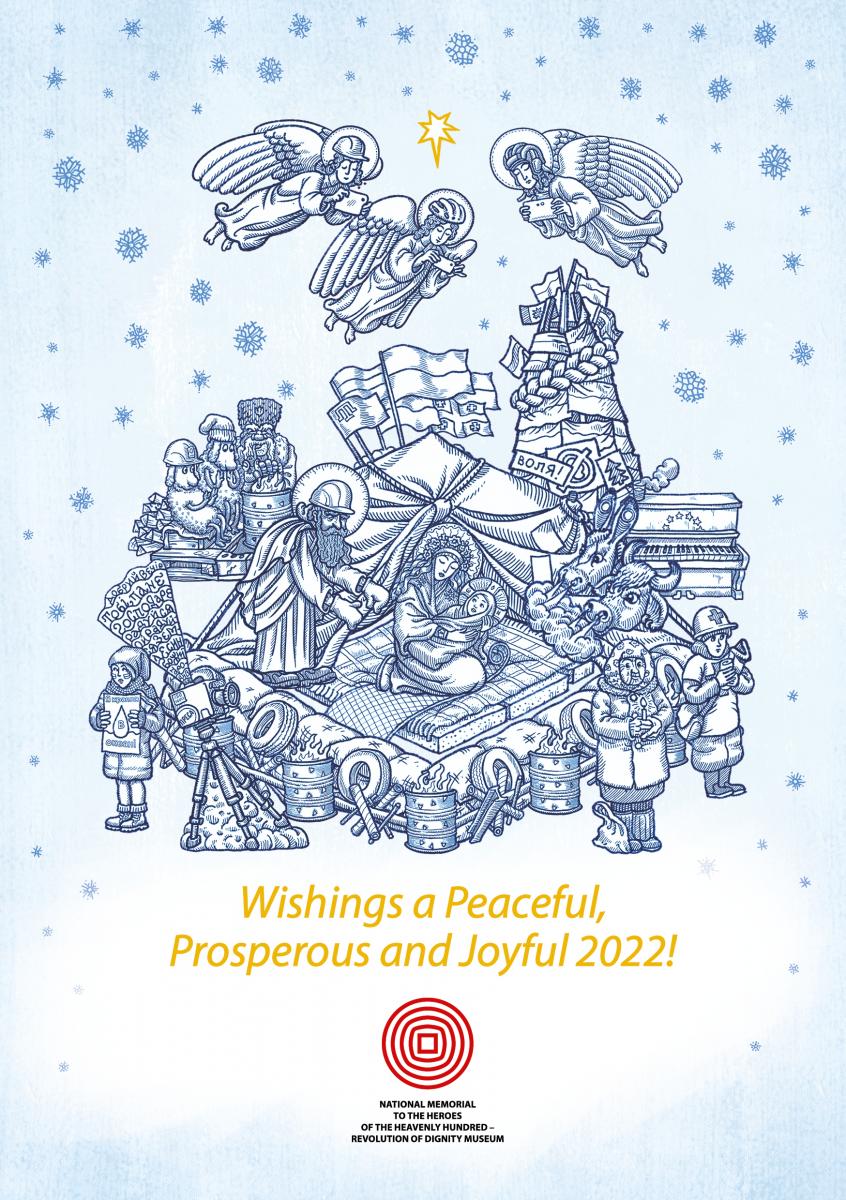 An artist Oleksandr Bryndikov and the National Museum of the Revolution of Dignity created coloring pages for kids based on the motives of the Nativity scene from Maidan. The coloring pages are dedicated to the Christmas Holidays!

Irish diplomats learned more about the tumultuous events of the Revolution of Dignity, the struggle of Ukrainians for freedom and democracy, the sights of Euromaidan, and the creation of the Museum and Memorial.

2021-11-30 16:48
Thank you to all Ukrainians and foreign friends who publicly honored the Day of Dignity and Freedom!

New media and revolutions of the new type in Ukraine and around the world: The academic forum

In the late twentieth century, after a wave of ‘velvet revolutions’, historians, political scientists, and sociologists launched discussions on a new type of revolution, or postmodern revolution, characterized by radical changes through negotiations between protesters and authorities. Nonviolent resistance and total people’s mobilization became a defining feature of such revolutions. Further mediatization of society and role of social media, activated at the beginning of the twenty-first century, added the media factor to essential characteristics of the new revolution type. It was mediatization of social reality and emergence of so-called network society that led to the unprecedented influence of social media on development of protest movements for civil rights and freedoms. This was especially typical for post-Soviet countries with not strong democracies and corrupted hybrid regimes, such as Ukraine, Belarus, Georgia, Moldova, Kyrgyzstan, Armenia, as well as for Middle East and North Africa: Tunisia, Egypt, Turkey, Bahrain, Iran, Yemen, Lebanon.

The President of Lithuania Gitanas Nausėda and his wife Diana Nausėdienė have honored the memory of the fallen peaceful protesters in times of the Revolution of Dignity at the Alley of the Heavenly Hundred Heroes in Kyiv.

About Ukraine's experiences with the fragile nature of democracy. Ihor Poshyvailo, the General Director of the Maidan Museum

On January 27th at 10am (EST), join us as we welcome Ihor Poshyvailo, the General Director of the Maidan Museum on our next "Member Spotlight" to discuss these developments, the museum's dedication to preserving the stories of survivors, and Ukraine's experiences with the fragile nature of democracy and what people can do to defend it.

Memory should be directed at the future

An interview with Ihor Poshyvailo, director of the National Memorial to the Heavenly Hundred Heroes and Revolution of Dignity Museum (Maidan Museum) in Kyiv. Interviewer: Tomasz Lachowski

National Memorial to the Heavenly Hundred Heroes and Revolution of Dignity Museum initiates the second open expert discussion in the format of the multidisciplinary scientific forum on November 19–20, 2020 in Kyiv, Ukraine. The focus topic of the Forum–2020: “Postmodern Revolutions: the EuroMaidan revolution in the context of global protest movements of the late 20th – early 21st century”. The Forum’s discussion is devoted to research of new types of revolutions, historiography and methodology of protest movements as well as their typological and genetic connections, essential characteristics, causes, timeline, specifics, outcomes and impact, and their terminology including the definition of ‘color/velvet revolution’ in representing such phenomena.

Addressing the conflict-affected heritage in Ukraine: Challenges and Responses

In February 2020 over 200 museum workers from different continents joined symposium in Washington to discuss the topic "Current Approaches to the Conservation of Conflict-Affected Heritage". The symposium was organized by "Smithsonian Cultural Rescue Initiative", "Smithsonian's Museum Conservation Institute",  "ICOM Disaster Risk Management Committee" and supported by The Andrew W. Mellon Foundation". Corine Wegener — the director of the Smithsonian Institution Culture Rescue Initiative — briefly explains the goals of the event. "Our mission is to protect cultural heritage threatened or impacted by disasters. And to help the USA and international communities to preserve their identity and history. One way we pursue our mission is to host a research symposium, bringing in scholars and practitioners from around the world to share their work".