It is truly very easy to identify who was the nation’s favorite, you just have to look at the folk songs. This argument was used very often by brothers Kaprаnovy every time they would talk about Maidan. Some unique folk art was seen during the protests and rallies against the authorities. But the mass aggression towards peaceful students later led into thousands of people coming to stand their ground and bringing that passion into art. “Ukraine will raise, Yanukovych will fall!” - it was one of the mottos on the first day of the Euromaidan. Ukraine raised. We can see titles about “New culture of new Ukraine” all over that places. Critics and viewers are agreeing on some fresh attention in Ukrainian culture, but they often forget that Maidan was the action that brought them into life. As many historians and sociologists say many people during social changes or conflicts tend to express themselves through the art.

Dmytro Riznychenko, blogger explained his feelings about an artist using an example of Salvador Dali “true artist — is like a naked nerve... he should feel the pressure of the history on the first place. A true artist should paint a picture “Feeling of the civil war” a few months before the civil war”. At that time he wrote “artist, who is not able to see the social problem or injustice can either can have no talent or be a pathological coward. The artist who has no courage to speak up — not an artist”.

There were many artists of different arts on the Maidan. If we will use pyramid Maslow we will see that maidan was a place where strong individuals were formed. From the time when Yanuckovych took over, the Revolution started to grow but was triggered it was a collective sense of danger. It is the lower stages of the pyramid. Revolution was for Dignity, which demonstrates the highest stage — honor. This wasn’t revolution about comfort, it was a revolution about dignity and honor. Throughout the whole, its path revolution has a lot of talent along its side. The top of the pyramid is self-expression. 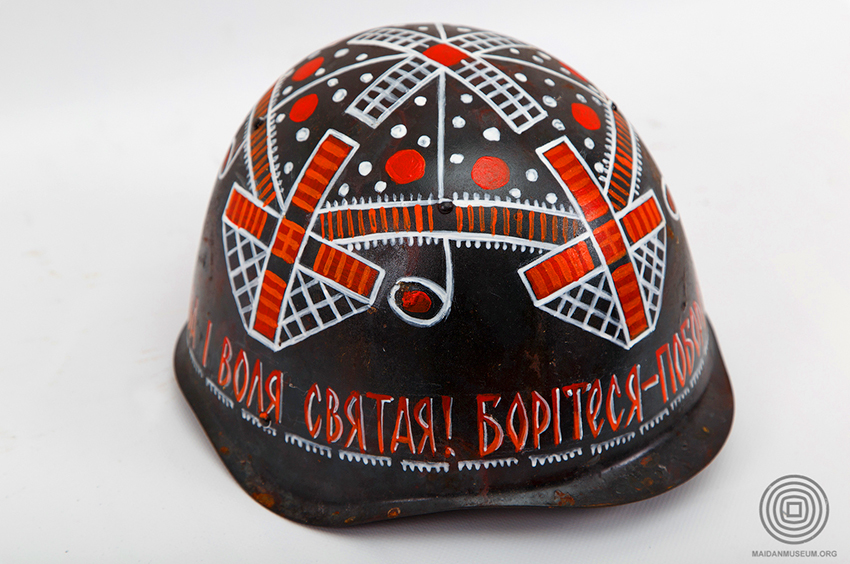 Many artists, musicians, writers had organized an Art Hundred, which left its traces in the history.

Participants of the Unity of free artists made a space on the Maidan that was called Art barbikan. They were demonstrating protective art. In the documentary “Maidan. Art of resistance” by Antin Mukharskyi Maidan is being called the first anti-swindler riot. There is a published anthology of artists of the Maidan. One of the artists Ivan Semeniuk thinks that understanding of the Maidan will come later. He called the events in Kyiv a start of the events that will happen in Europe in the next 100 years.

Artists, who created “Artil of Maidan” were famous for painting the helmets. Best of them were already shown as a part of the exhibition in many countries. Some of them are already a part of private collections. It is not surprising, that one of these helmets was sold in the USA for 1000 of dollars because they had real emotions and pain inside of them. Also, we can say that there are authentical paintings on all of them.

One of the great illustrations to that is a project “Shield painter” by Art Hundred. Artists were painting shield with symbols, protective and for good luck, especially for the warriors of self-defense.

Many artists were singing and speaking from the stages on the Maidan, showing their works which were inspired by the Revolution. For example, guitar man and translator Victor Morozov wrote music for more than 40 satirical poems by Andriy Panchyshyn.

Of course, music wasn’t only on stage during the Revolution. Art of Revolution is young Markiyan Matsekh, who bought a piano and put it in front of security officers. He set a good example and soon there were Antuanetta Mishchenko and Piano Extremist, promoting the same idea.

Ukrainian Revolution wasn’t inspiring only local artists. There are many foreigners devoting their art to the events in Kyiv.

Of course, you don’t have to be a professional to leave your part in history. Now all the pieces of art are very valuable. Students of the Academy of arts forgot about their topics for the diplomas and started to search topics that were brought up by events. One of the studies is fully devoted to different print types.

One of the many unique parts of the Maidan Art is the way artists were decorating shields, helmets. Sticks. Even the armor can be a topic for its own study. They are so personalized and unique that London artist Anastasia Taylor Lind made a photo place right in the middle of Maidan and was taking portrait pictures of all the men in the tent city. Later she organized the whole album with this pictures and presented it during one of the TED conferences.

Cameraman and photographers had enough work, too. We are grateful to them for the ability to learn more about these heroic events.

Many people, recognized and unrecognized, felt needed during the Revolution and they had a chance to express themselves and be useful at the same time. But it is a whole another story about different songs and projects.