On November 28, 2000, Oleksandr Moroz, the Head of the Socialist Party, played to the Verkhovna Rada (Ukrainian Parliament) audio records, which were made in the Leonid Kuchma’s, Then-President’s, office. Based on these records, the Head of the State was accused of ordering the murder of an opposition journalist Georgii Gongadze, which took place on September 16. This so called tapegate rapidly turned into  Kuchmagate – “Kuchma hate” – and initiated street protests.
A first action with a call for the President’s resignation took place on December 15. The protesters’ stayed in their tent camp during 12 days. Three days before the New Year, utility crews blocked the Independence Square, where the camp was located, allegedly for the square reconstruction.
On January 14, 2001, the second stage of the action Ukraine without Kuchma started. The tents spread along Khreshchatyk, from the Independence Square (Maidan Nezalezhnosti) to the Bessarabska Square. Meetings requiring the resignation of Leonid Kuchma and all the tops of law enforcement authorities occurred within several weeks. 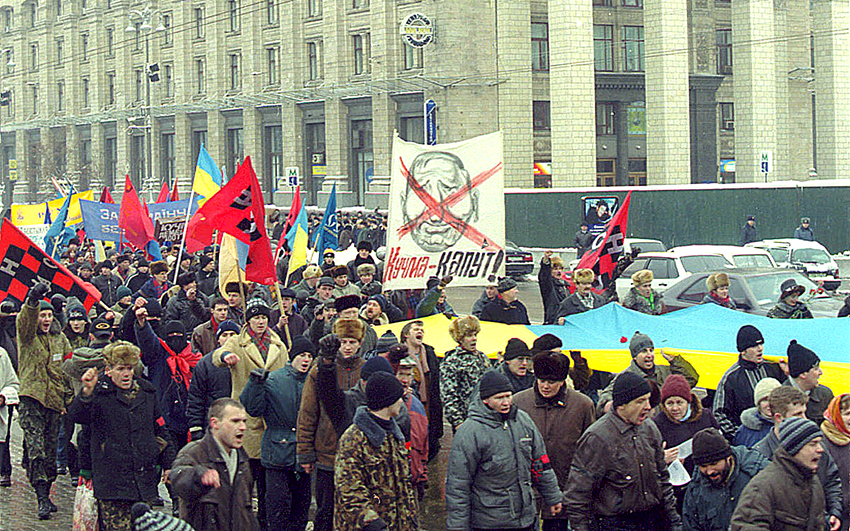 On March 1, the tent camp was pulled down by the Ukrainian then-police, which was called militia.
In a week, the opposition declared that on the birthday of the National Bard Taras Shevchenko they would not let Kuchma lay floral tributes to a Shevchenko’s monument. On March 9, due to militia’s assistance, the President managed to commemorate the poet, but then a hundred thousandth demonstration turned into clashes with the militia. The most massive fight took place near the Presidential Office, when protesters were getting back from the Ministry of Interior. There, they required to start criminal proceedings “against the Killer President”.
After 5.00 p. m., a founding congress of the movement “For the Truth!”, was opened at the Teacher’s Club. The movement appeared on the wave of people’s unrest over political leaders. Most of congress delegates were students.
Simultaneously, special forces took Headquarters of the Ukrainian National Assembly Ukrainian Peoples’ Self-Defense (UNA-UNSO). Members of this organization secured the anti-Kuchma camp and its events. After that, till the late night, the militia seized a lot of young people, who could sympathize with anti-governmental movements, at railway and subway stations. These people were identified very questionably. The militia grabbed not only those with action symbols. Many uninvolved people were detained, because detention reasons included, in particular, badges with national symbols on bags or clothes, as well as speaking Ukrainian, which at the beginning of the century was not so common in Kyiv as it is now.
More than 300 people were taken to Kyiv pretrial detention centers on March 9, 2001. Most of them were released next day due to the interference of opposition deputies. Some people were charged with “public obscenities” and detained for a few days.
However, 19 participants of the meeting were punished with 2-5.5 years of confinement for the “riot organization”. At different stages of the investigation, they claimed of being pressed and tortured.
Among currently public persons, who were imprisoned in 2001 for street politics, one can mention a former UNSO Head Andrii Shkil. In 2002, he entered the Verkhovna Rada immediately after being released, as a peoples’ deputy from the  All-Ukrainian Union “Batkivschyna” (“Fatherland”).
Ihor Mazur, the today’s Deputy Head of the UNA-UNSO, which turned into the political party in 2015, at the beginning of the war became a commander of a UNSO reconnaissance company. He is an officer of the Ukrainian Armed Forces.
Another “kuchmistic prisoner” Mykola Karpiuk, in March, 2014 was captured by Russian border guards while entering the Russian Federation. He is charged with crimes against federal troops during the first Chechen war.
Mykola Liakhovych, a human rights activist, who was imprisoned for preparing the action against Kuchma, in 2015 became a head of a newly created National Patriotism Education Department at the Ministry of Youth and Sports of Ukraine.
"Ukraine without Kuchma" is the action that succeeded, contrary to the action "Raise, Ukraine!", which was financed by some parties, - Andrii Pidpalyi, one of initiators of the action, remembered in his interview to Ukrainska Prawda (Ukrainian Truth). First, there was the impression that everything is very bad. Approximately half a year before the murder of Georgii Gongadze, I felt that the system is already able to destroy citizens physically. Before, there were killings in business, but on the 16th of September, a person suffered, who was very significant for me. The system crossed the line, by doing some kind of a ritual killing. The ex-government decided to turn Ukraine into a Pinochet Chile parody – and there could be some thousands of dead "too active" opponents”.
“It was the first large protest in the contemporary history of Ukraine. The reason was the journalist Gongadze’s murder. But real causes were social ones. And this was confirmed by the fact that only 20,000 people started protesting, and then there were 50,000 and even 100,000 protesters. That is to say, people came and these people might not know who Gongadze even was. This resulted not only in the resignation of Derkach and Kravchenko [Heads of the Ministry of Interior and the Security Service], but what is the most important thing, we definitely buried the implementation of 2000 Kuchma referendum, which could transform Ukraine into a despotic state. However, the main requirement, the resignation of the President, and in fact, the change of the system, did not come true. Thus, social conflicts remained and their manifestations renewed vigorously soon, in 2004”, – Volodymyr Chemerys, one of the protest organizers told to the  Den Newspaper (Day) in  2017.