During the revolutionary winter of 2013-2014, a group of like-minded people, understanding the historical scale and social significance of events, called for the preservation of unique evidence for the descendants and began collecting work on barricades and educational work in the media space. In January 2014, an initiative Maidan Museum was launched, which in autumn merged with the initiative Museum of Liberty.

Maidan Museum / Museum of Liberty worked on the concept of the museum, collecting artifacts and evidence, providing preservation, research and promotion of objects and places related to the events of the Maidan. At the various stages of development Maidan Museum received support of the Self-defense of the Maidan, the Maidan Library, the Art Hundred, the Maidan Mail, the Automaidan, the Maidan Press Center and others, as well as the Ukrainian Institute of National Remembrance, the Ministry of Culture of Ukraine, the Kyiv City State Administration, the Ivan Honchar Museum, the National Sanctuary Complex Sophia of Kyiv, the Kyiv History Museum, the National Museum of Ukrainian History in the Second World War, Agency for Cultural Strategies, and Ukrainian Committee of ICOM. Yevhen Hlibovytsky, Olexandr Baklanov, and Olesya Ostrovska-Lyuta, the representatives of the analytical company pro.mova, supported the initiative as well. Families of the heroes of the Heavenly Hundred and the victims of the Maidan took part in the process of memorializing the events of the Revolution of Dignity.

The cooperation of museum workers and activists who, by the end of 2013, realized that the mobilization of mass protests had historical and social importance, and that the understanding of freedom as a cultural and social value has a special manifestation in the modern history of the state was an important contribution to the civic resistance during the EuroMaidan. The activists of the group called for the preservation of unique evidence for the descendants and started educational work on barricades and in the media space.

In January 2014, Vasyl Rozhko, Igor Poshyvaylo, Mykola Skyba, Andriy Kotlyarchuk, Tymur Bobrovsky, and Kateryna Chuyeva, with the support by the Self-Defense of the Maidan, and subsequently by the Ukrainian National Committee of the International Council of Museums (ICOM), and the Ukrainian National Committee of the Blue Shield called for founding of Maidan Museum. In addition to the initiators, the first official workgroup responsible for creating the concept of memorialization and museum design of events of the Revolution of Dignity included representatives of the Ministry of Culture of Ukraine, the Ukrainian Institute of National Remembrance, museum workers and public activists from the National Art Museum of Ukraine and the Ivan Honchar Museum, and independent experts and scholars such as Volodymyr Yermolenko, Mykhaylo Minakov among others.

The draft of the abovementioned concept was the result of the interaction of specialists in the field of museum and monument protection, public activists, art historians, historians and cultural managers. In April-July of 2014, Tymur Bobrovsky, Volodymyr Vyatrovych, Rostyslav Karandeyev, Lydia Karpenko, Alla Kyrydon, Igor Poshyvaylo, Vasyl Rozhko, Kateryna Romanova, Mykola Skyba, Kateryna Chuyeva, and Mykola Yakovin worked on the text of the concept. 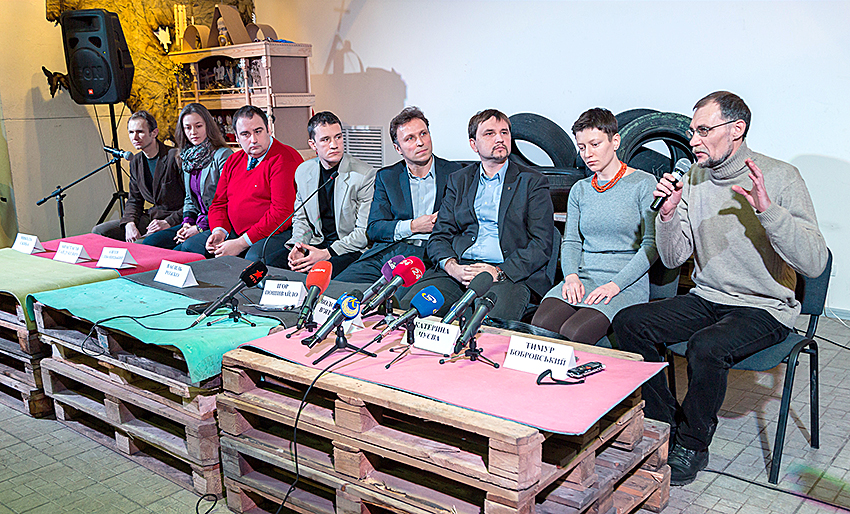