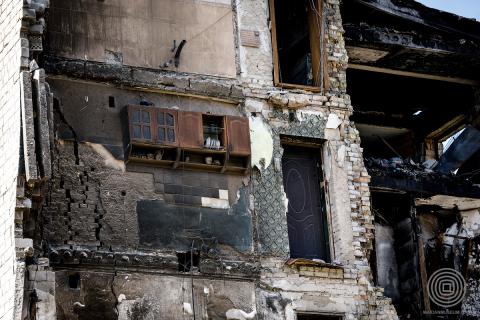 A cultural "special operation" was carried out to conduct museification of the legendary kitchen cabinet and preserve all its contents. Starting today, it will be stored in the funds of the National Museum of the Revolution of Dignity. A decorative ceramic rooster, which survived the explosion of the ruscist aerial bomb, is also a part of the fund now.

About two weeks have passed since the liberation of the Kyiv region from the occupiers. New places of mass crimes committed by russians added to the Ukrainian topography. The time will come, and these tragic pages will be memorialized and reflected upon. The memory of the innocent victims will become a part of our national memory and history, along with the evidence of heroism and fortitude in the struggle for freedom of the Ukrainian people against the heinous and cynical enemy.

One of the symbols of this fortitude is a kitchen cabinet from Borodianka, Kyiv region. It was hanging on the wall in the apartment complex, destroyed by a bomb. It stayed intact, where there seemed to be no chances. It was intact will all its contents: porcelain dishes, glass doors, spice jars, traditional souvenirs. And even a ceramic decorative jar for drinks in the form of a rooster. It was made in the 1960s by prominent masters of artistic ceramics from Vasylkiv, Valerii and Nadiia Protoriev.

A common element of kitchen interior has become a legend thanks to a photo by Kyiv photojournalist Elizabeth Servatynska, published across the globe.

The picture of a rooster in a cabinet, still intact with all its contents, on a wall of a destroyed building, became an illustration of perhaps the most common dialogue between Ukrainians today, 'How are you doing? - I am hanging in there…"

However, the building, where the cabinet is hanging, is in critical condition, and the wall is about to collapse. Therefore, there was a need to save and preserve the unique symbol of Ukrainian resistance.

On April 14, with the permission of the apartment's owner, Nadiia Svatko, the cabinet was carefully dismantled. It was important to preserve every detail, up to the screws, fastening the cabinet to the wall. The surrounding area, the ruins, and the wall with the cabinet were documented by DroneUA, using a drone to create a 3D model. They took photos and videos and recorded the location of each detail. In the future, it will allow reproduction of the location and environment with maximum accuracy. Representatives of the Maidan Museum and Dovzhenko Center also photographed the surroundings and collected objects and oral testimonies of residents from nearby houses.

The cultural institution 'Mizhvukhamy', in cooperation with Maidan Museum, Heritage Emergency Response Initiative, and JSC System Solutions, initiated and carried out this difficult operation. Borodianka's United Territorial Community with the Ministry of Culture and Information Policy of Ukraine made museification possible. Thanks to the high professionalism of the staff of the Emergency Service of Ukraine, Borodianka's symbol of resistance, eternity, and victory of light over darkness is now in the Museum Fund of Ukraine.

This first expedition marks the beginning of systematic work conducted by the Heritage Emergency Response Initiative and its partners in gathering the history of this russia's war against Ukraine. Our mission is to record and preserve tangible and intangible evidence of the Ukrainian resistance and courage, their ability to help each other, mutual support and intransigence to the enemy, and the heroic struggle of Ukrainians for dignity and freedom.

Museum workers, cultural figures, activists, the military, and activists are now working hard to preserve the memory of the war. They are trying not to miss anything, not to lose important objects and symbols. They follow in the footsteps of our tragedies and victories to preserve the historical memory of the most defining event in modern history. The time will come, and those, who defended Ukraine and survived the hell of a war with it, will take their children and grandchildren to the museum to honor our people and see not only the history of the struggle but also what we fought for.