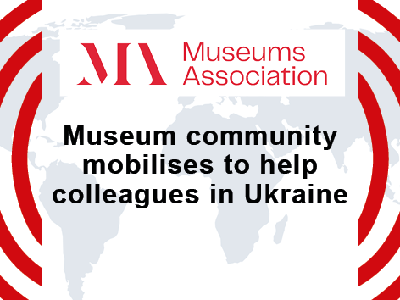 Museum workers in neighbouring countries are mobilising to help colleagues in Ukraine amid fears that cultural institutions and their workers will be at particular risk from the Russian invasion.

The International Council of Museums (Icom) Polish branch has been asked by the Polish Ministry of Culture to coordinate evacuation plans for museum employees from Ukraine, and an emergency meeting is taking place today to discuss the evacuation of objects.

Meanwhile staff and the National Museum in Warsaw are coordinating efforts to welcome the families of employees from the National Gallery of Art in Lviv, with whom the Polish institution has a close relationship. They have also sent a van from the museum with supplies of non-perishable goods for those remaining behind. The Museum of Warsaw has an active refugee programme in place to support former museum employees and is working to welcome families to Warsaw.

Polin Museum of the History of Polish Jews has sent two transports of goods to Ukraine. Financial support for these efforts is being channelled through the Polish Red Cross.

Jack Lohman, a museum leader and curator based in Poland, who is currently helping to welcome refugees at Warsaw's Srodmiescie railway station, told Museums Journal: “It is a deeply distressing and indeed terrifying time and one that is affecting the morale of everyone working in museums here, but somehow everyone is mobilised to do something in support. The spirit of working together is hugely impressive.”

There are fears that museum professionals known for their work on human rights and democracy will be particularly vulnerable to reprisals. Efforts are under way in the international museum community to sponsor visas for those at risk and their families.

Many Ukrainian museum staff have stayed behind and put their lives in danger to safeguard the country's rich cultural heritage, with workers moving collections into hiding and erecting barbed wire. Other museum staff are known to have already joined in the fighting.

Museum leaders have warned that cultural heritage in the country, which is home to seven Unesco world heritage sites, will be a particular target for looting or destruction.

It was confirmed yesterday that the Ivankiv Historical-Cultural Museum, a museum of archaeology, history and visual arts around 50 miles north of Kyiv, was destroyed by fire. The museum housed around 25 paintings by the self-taught Ukrainian folk artist Maria Prymachenko (1908–1997), whose work is admired globally. The destruction of the museum has drawn international condemnation, with the Icom-US saying it had “illuminated a tangible and irreversible impact of this immoral and unprovoked war”.

The director of the National Museum of Ukraine in Kyiv, Fedir Androschuk, is urging the international museum community to raise “awareness about the cultural heritage in Ukraine and the threats that it now faces”. n a statement, he said: “The war rages on in Ukraine, bringing death and destruction to the country and its people. As is made clear in the rhetoric of president Vladimir Putin, who does not acknowledge the legitimate history of Ukraine, this is also an assault on their cultural identity […] the threat of the National Museum of History and other museums being looted or destroyed by enemy fire is very real.”

In a letter of appeal, Maidan Museum, which documents the Ukrainian struggle for national independence, wrote: “The best response to Russia's aggression in the cultural sphere is to increase interest in Ukraine's history and culture throughout the world. Thus we are calling on all cultural figures, historians, artists, public figures, community leaders, media in the world to reveal the truth about suppression, distortion of historical facts, erasure of Ukrainian cultural identity, to promote cultural heritage by all possible means, to ensure wider access to the genuine history of Ukrainians' path to freedom and democracy, our cultural identity and our devotion to universal human values.”

The Mystetskyi Arsenal National Art and Culture Museum Complex in Kyiv has published a list of actions that international museums can take to show solidarity and support for colleagues in Ukraine.

Peter Stone, president of the Blue Shield International, which supports the protection of cultural heritage in times of conflict, said: “The Blue Shield is extremely concerned regarding the escalating conflict in Ukraine. We ask all those involved to obey all relevant international law and to protect the civilian population wherever and whenever possible.“We stress in particular the responsibilities of all involved under the 1954 Hague Convention on the Protection of Cultural Property in the Event of Armed Conflict and its two Protocols of 1954 and, where relevant, 1999. “The Blue Shield stands ready to assist anyone involved in the conflict to protect cultural property in Ukraine and to work towards an immediate end to the conflict.”

Statements from the international museum community

The International Council of Museums (Icom) strongly condemns this violation of the territorial integrity and sovereignty of Ukraine. Icom is especially concerned about the risks faced by museum professionals as well as the threats to cultural heritage because of this armed conflict. Icom expects both countries, as States Parties of the 1954 Hague Convention for the Protection of Cultural Property in the event of armed conflict and its First Protocol, to abide by their international legal obligations to protect heritage.

Already this conflict is deeply distressing and likely to result in an unacceptable loss of life, therefore Icom calls for a swift ceasefire, immediate mediation between belligerents, and coordinated efforts to ensure the safety of museum personal and protect cultural heritage.  In times of conflict and uncertainly like these, Icom must also express its deep concern the implications this uncertainty will have on the safety and security of Icom members, museum personnel and cultural heritage in Ukraine.

The Museums Association supports the International Council of Museums’ condemnation of the invasion of Ukraine by Russian Federation military forces and echoes its concern about the risks faced by museum professionals on the ground in Ukraine.

Already the international museum community is rallying and offering support, including refuge, and we encourage colleagues in neighbouring countries in particular to continue and step up their offers of solidarity and support.

The primary concern must be the safety of museum staff and the wider population – in addition there is a threat to the material cultural heritage of Ukraine and, as signatories of the 1954 Hague Convention for the Protection of Cultural Property, in the event of armed conflict we would call on both countries to abide by their international legal obligations to protect heritage.

Association of Art Museum Directors, US

The Association of Art Museum Directors (AAMD) stands with the global cultural heritage community in condemning the violation of Ukraine’s territorial integrity and sovereignty. Risks facing civilians—including artists and museum professionals—and threats to cultural heritage because of this armed conflict are deeply alarming.

AAMD urges its members to be a resource and an ally to the museum professionals and artists of Ukraine.

The current conflict has taken lives, displaced tens of thousands and destabilised the international order. That it also seeks to destroy – recklessly and intentionally – the heritage, institutions and access to history of a great nationa and palimpsest of past cultures abrogates the reasonable expectations of civil society and the treaty obligations of which the United States, Russia and Ukraine are all signatories. As articulated in Principle One of the Icom Code of Ethics: “Museums preserve, interpret and promote the natural and cultural inheritance of humanity.” They are not targets. Their workers are not pawns. Their collections belong to the future. Willful damage and the loss of lives are reprehensible, the loss of culture and its history is irreparable.

The United States Holocaust Memorial Museum, Washington, DC, strongly condemns Russia’s outrageous attack on Ukraine and is deeply concerned about threats to civilians and loss of life. In justifying this attack, Vladimir Putin has misrepresented and misappropriated Holocaust history by claiming falsely that democratic Ukraine needs to be “denazified.” Equally groundless and egregious are his claims that Ukrainian authorities are committing “genocide” as a justification for the invasion of Ukraine.

“We strongly condemn this unprovoked attack and are greatly concerned about the loss of life. The museum stands with the Ukrainian people, including the thousands of Holocaust survivors still living in the country,” said museum chairman Stuart E Eizenstat. “These survivors are remnants of one of Europe’s largest prewar Jewish populations that was almost completely decimated by the Germans in world war two. Having suffered terribly as victims of both Nazism and Communism, Ukrainians today are seeking to fulfil their democratic aspirations.”