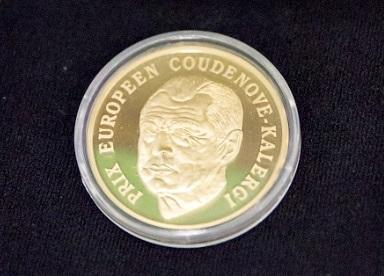 Starting from 1978 every two years the prize of the European society of Kudengau-Kalergi was going on a person who made remarkable actions for uniting Europe. This year The Heavenly Hundred was awarded, due to their undescribable heroism and bravery. They all sacrificed their lives on Maidan in the fight for human rights and European values.

Ihor Zhaloba, head of the Pan-European association of Ukraine shares worries he had before awarding "Altogether with my European colleagues we were thinking about how to give this award. How will prince Nicolaus von Liechtenstein, as a representer of the whole European society of Kudengau-Kalergi, award the whole Heavenly Hundred? It would be kind of problematic to invite all the families with all the relatives. And that is when we thought about the Museum of Maidan".

Ihor Poshyvailo, the head of National Museum of the Revolution of the Dignity, received an award from the prince Nicolaus von Liechtenstein,  head of European society of Kudengau-Kalergi.

Ronald Reagan, Helmut Kol, Angela Merkel were also awarded this premium. But it is first time in the entire history when this award was given to more than one person.

Award is named after Rihard Kudengau-Kalergi, founder of Pan-European society – structure, that appeared after WWI and which actions are targeted towards rapprochement of European countries (becoming a part of the European Union).

The conception of Pan-European society is to help keep Europe peaceful and keep up the safety in all the countries. Also, they aim for political stability in the world.

Count Otto von Habsburg, head of the Pan-European Union, 13 years ago said "Putin is very open with his intentions. Hitler was the same. People like that don't just say something. If the world's society won't react to their aggression, catastrophe might happen".

Award was given during the first Pan-European conference in Ukraine – on October 18, 2018, in the National Agency of Ukraine for Civil Service.

Here you can read parts of speeches from the conference.

Ihor Zhaloba, head of the pan-European union of Ukraine.

Since 2014 we live in different Ukraine. The Heavenly Hundred is our pain, our pride, and our responsibility.

It is our pain, because all lives matter, all lives are precious. No one wanted to die, no one thought that he would die for European values in the center of European capital.

It is our pride because there are people in Ukraine who understood that only we can make some changes in this country. Was Ukraine famous before that? When we announced independence we were famous for Chornobyl. Then no one knew about us, but everyone thought that we were a part of Russia. Then we were known as a country of cheap working power, and then as one of the most corrupted countries. And then suddenly people who were ready to stand up for what was right appeared.

It is our responsibility, because now in all Ukrainian cities we can see how people's memories are changing. Instead of names of some Soviet activists, our streets are getting named after our heroes. It has an emotional impact. Your childhood friend suddenly appears on a memorial board. That's why we, those who are alive, have a huge responsibility for those who died fighting for freedom.

As a human, I want that blood to be the last blood. As a historian, I understand that it's not possible. The Heavenly Hundred is a symbol of a fight, continuous fight. You can simply walk up to Saint Michaels monastery to see new names appear on the board. New heroes, unknown heroes, are in a much worse situation that we are. They are in ATO, fighting for our country. They don't have coffee breaks, they don't have all the comfort that we all have. But we do. And we have to be grateful for it.

During the whole revolution, we were helping 24/7. I remember hundreds of people – wounded, beaten up, tortured, arrested, accused of false criminal cases. All the people who were not only In Kyiv but also in Luhansk, all the people who came to the squares and demanded to sign the agreement. All these people were fighting for a new society, in which authorities are clear, where their actions are under the public eye, where we have a European vector of development.

Ukrainians paid a high price for that. I remember three next days after the shootings. We got a lot of calls on our hotline. Our volunteers were going to morgues, to hospitals, to churches, just everywhere were bodies were held. They were documenting those, who got killed by the authoritarian regime.

When the regime fall, Ukraine could build a new democratic system, based on democratic values. And it was a threat for another authoritarian regime – Russian Federation. To stop Ukraine on its way to democracy, Russia annexed Crimea and started a war that continues 5 years for now. It took the lives of ten thousands of people. There are 22 thousand wounded and 2 millions of refugees.

On the other hands, these events let our energy to go out and create a phenomenon of Maidan. It is hundreds of thousands of initiatives. It is people who took responsibility. They don't give this responsibility to politics, they decided to take action and improve Ukraine with their own hands.

Five years after Maidan and we are talking about the goals of Ukraine.

First one is to keep the European vector of development by making needed reforms. Foreigners say that in this 5 years Ukraine had more positive changes than if whole time of its independence. We know that reforms are not systematic and not radical but we need to take some steps in order to build democracy. We need to build a country where none of the authorities will think about shooting peaceful protests.

The second one is to keep this vector in the Russian-Ukrainian war. We shouldn't fall for their promises. We shouldn't limit human rights, because it goes against everything that we were fighting for. We are not fighting for land or territories. We are fighting for people who live there. There will be no point if winning the war with Russia if that will turn as into authoritarian country once again.

A third one is to learn how to protect our civilians. First of all, those five million who now live in the Crimea and Donbas. They don't have any legal protection. Most famous of them is Oled Sentsov, who is now arrested. His words "My country won't abandon me" should be proved by political and civil actions.

We have more goals than what I just named. But even to reach these three we need even more people and even more power and energy that was used during the Maidan. All of this proves that the fight for the European vector is a long fight.

Ihor Poshyvailo, general director of National Memorial Complex of the Heroes of the Heavenly Hundred – Museum of the Revolution of the Dignity.

This award empowers and shows, that heroes didn't die for anything. It is also will help us to not only tell the stories of each hero but also to open this part of our history for the whole European community.

Count  Rihard Kudengau-Kalergi, showed his vision of continental Europe from Portugal to Poland 95 years ago. It is sad, that Ukraine wasn't included. Probably, it would save Ukraine a lot of dramatic events, if European activists would understand its importance in European family back in 1923. Because we already were a part of that family. Our first constitution was written by Philip Orlyk. That constitution was all about democracy. Not everyone understands Ukrainian power of abnegation and energy that we showed 5 years ago on the Maidan – the biggest peaceful protests in the Newest History. It was 61 days of the Revolution before the first wounded. There were much fewer people involved in Salt March of Gandhi, 1930 or in "I have a dream" speech by Martin Luther King during the demonstration against segregation in the USA and even in Prague spring of 1989.

Mister Kalergi said, "The epochal events began as a utopia, and ended as a prominent historical reality". Students started Euromaidan, and it did seem like a utopia at that time. And today we have an amazing progress of the state, despite some of our dissatisfaction.

We will have an institution of understanding the past, which will also aim to develop future changes. Because people came to Maidan for changes. It is the first time in Ukraine when the museum creates on the principles of openness and large-scale competition, it is completely European to make it not a conservative institution, but a new type of institution. There are museums like that in a world, but not in Ukraine. It will be like a model for future changes in Ukraine..