The revolution on granite

The central square of Soviet Kyiv was called the Square of the October Revolution. It was here that the first modern Ukrainian revolution began. Just a few suspected that the last winter of the USSR was lasting.
If we compare our revolutions, correlate the duration and achievement of the declared goals, the most successful may be the Revolution on Granite of 1990. Of course, it is important to understand that each historical epoch has its own context. The demands of the students at that time were entirely in the key of strong democratic trends, and fit into the processes launched by the opposition in other union republics. The imperatives of the student revolution became the catalyst for freedom and the collapse of the USSR. Whereas Ukrainians who took to the streets in 2013 radically changed the vector of the state course.
For better or worse, in 16 days in October 1990, a student-organized protest met its five demands. On the 17th the Verkhovna Rada of the Ukrainian SSR guaranteed by a resolution:
• To dismiss the Prime Minister of the USSR Vitaliy Masol
• To hold new elections in the Ukrainian SSR
• To ensure the passage of military service by citizens of Ukraine outside the republic only with their consent
• To create a temporary commission of the Verkhovna Rada of the Ukrainian SSR on the issue of nationalization of the property of the Communist Party of the USSR and the Komsomol on the territory of Ukraine
• To postpone the signing of a new union treaty between the republics of the USSR 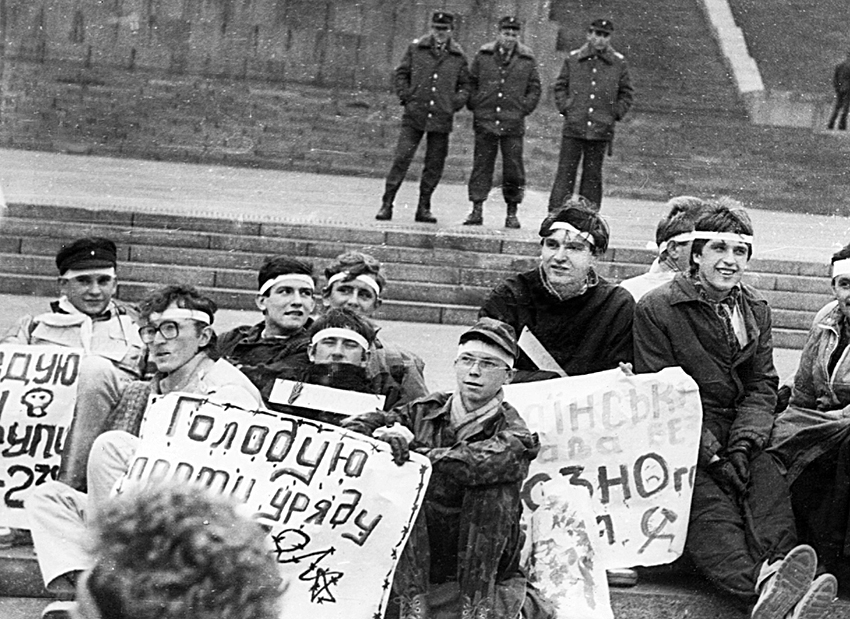 “ On the first day, 108 people went on hunger strike, 80 of them from Lviv”, recalls Andriy Salyuk, head of the student fraternity of Lviv Polytechnic at that time. And on October 6 the commission created on behalf of the Verkhovna Rada reported that 158 people from 24 cities of the Ukrainian SSR are on hunger strike. The majority of parliament at the time was the Communist "Group 239". The parliament laughed at the claim that many of the hunger strikers had a fever.
“After the events, I saw classified documents from the KGB of the USSR that a large-scale political action was being prepared for December. The authorities knew everything. And we understood the threats. If we could not gain a foothold in the square, we had other options. However, surprisingly, Plan A worked. In general, all Ukrainian revolutions have one thing in common: they would not have taken place without the support of the population of Kyiv”, – says the participant of the hunger strike, the current diplomat Denis Avtonomov.
Singer and TV presenter Andzelika Rudnytska agrees with him: “We did not expect or hope for this, but there was more support than we could have imagined. It was in small things. Our philosophy teacher was very strict, everyone was afraid of her. And on the exam she gave me "excellent" and turn back the credit book with the words: I'm proud of you”.
The protesters gained additional authority every time when famous people like the writer Lina Kostenko expressed their support. Actress Nila Kriukova even joined the hunger strike. And the writer Oles Honchar publicly burned the membership card of the Communist Party of the Soviet Union on the square.
“The Maidan was flooded with flowers. I have not seen so many flowers, and it was cold autumn. Girls were especially presented”, recalls Viktor Roh, a participant in the hunger strike from Sumy. He adds the following about the effectiveness and consequences of the protest: “These events greatly frightened our senior "leaders", and on the elections to the Verkhovna Rada in 1994 a law was already introduced - it acted only once - according to which it was forbidden to run for citizens under the age of 24”. This was done to cut off the active youth who showed themselves in this aspect. And then neither Medunytsia, nor Roh, nor Donii, nor Tiahnybok, nor many other people could run”. 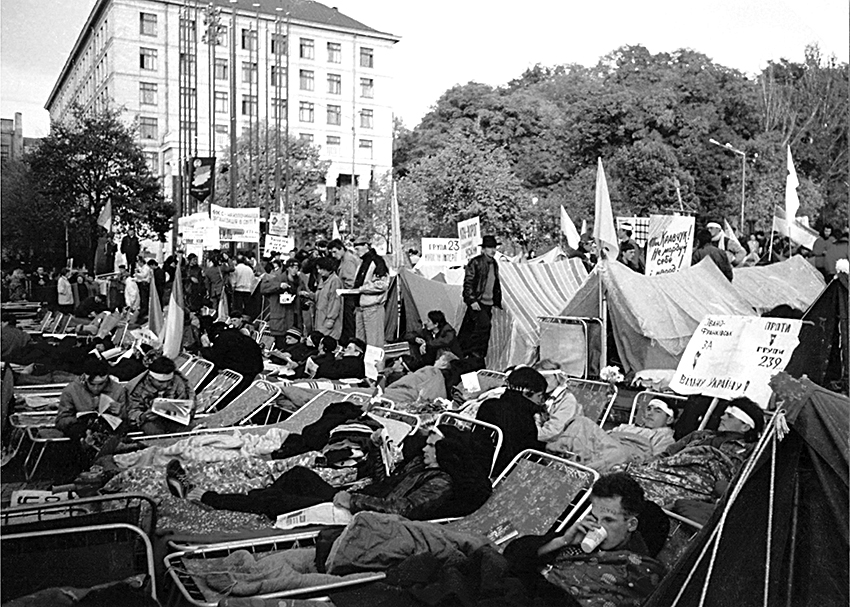 The article is written on the basis of exclusive stories of participants, as well as materials on the web-sites ukrnationalism.org, istpravda.com.ua, uk.wikipedia.com.