The Orange Revolution is a protest action by Ukrainian citizens that was caused by the massive rigging of the 2004 presidential election in favour of the pro-government candidate Viktor Yanukovych. These events were named after the colour used by supporters of presidential candidate Viktor Yushchenko and an opposition party known as Our Ukraine. Citizens who were not indifferent to the fate of Ukraine gathered under the orange flags. 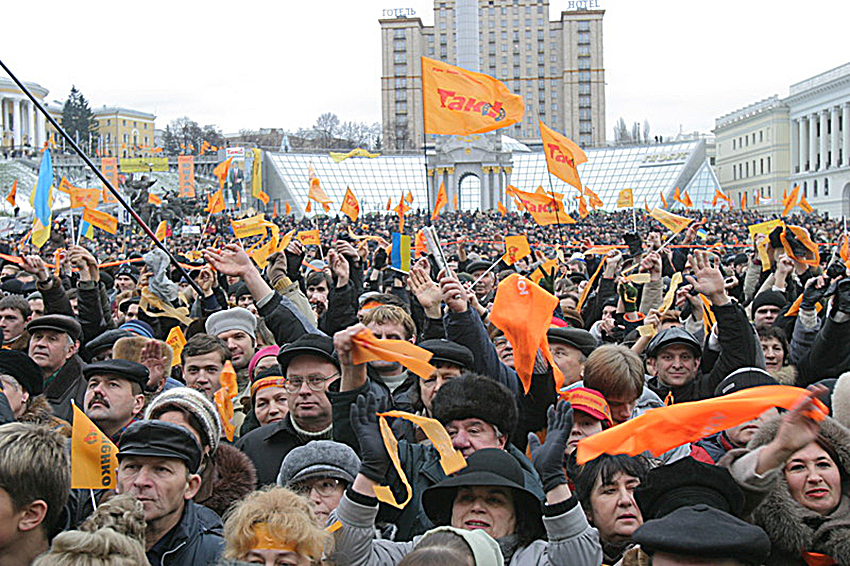 On October 31, 2004, the first round of the fourth presidential elections took place.

In the western and central regions, the advantage was on the side of Viktor Yushchenko, while in the southern and eastern regions, voters supported Viktor Yanukovych. Before the second round, Yushchenko led a coalition that included such candidates from the first round as Yuliia Tymoshenko, Oleksandr Moroz, and Anatolii Kinakh. Yanukovych, on the other hand, relied on the maximum turnout of his potential electorate in the eastern regions, apparently using the administrative means. The incumbent President Leonid Kuchma did not support the candidacy of the Prime Minister. Two days before the second round, he said the campaign was dirty. He assured that the government would do everything to prevent the situation from escalating into a revolution.

The second round of elections took place on November 21, 2004. Realizing that his chances of winning are negligible, Viktor Yanukovych used all possible administrative means for his own victory, as a result of which the turnout in Donbas was falsified to 89.5 % in Luhansk and to 96.7 % in Donetsk region.

Starting from November 21, supporters of the Our Ukraine party began to erect a tent city on Maidan Nezalezhnosti (that is, Independence Square) in Kyiv. On that day, the number of protesters was about 30,000. The next day, it reached 100,000 people. On November 23, 400 tents were erected on Khreshchatyk. Thanks to satellite broadcast from Maidan Nezalezhnosti, the whole world learned about the events in Ukraine. Foreign journalists were surprised by the scale of the popular demonstration, which was caused not so much by the results of the elections as by the dissatisfaction of citizens with their position and the way of public life that had prevailed for more than a decade.

On November 24, the Central Election Commission approved the official protocol of the second round of elections, which differed significantly from the National Exit Poll data. Volodymyr Lytvyn, Chairman of The Verkhovna Rada of Ukraine, announced that no state agency has the authority to cancel the election results. In turn, Leonid Kuchma called for the non-use of force against the protesters and the urgent need to find a way out of the deadlock.

Days passed, but the situation did not change, since negotiations between the parties were fruitless. Finally, on November 27, at an extraordinary meeting of the Verkhovna Rada, the deputies expressed no-confidence in the Central Election Commission. At that time, Yanukovych’s supporters in the eastern and southern regions tried to provoke separatist sentiments, which threatened the country’s integrity. However, their attempt failed without any development.

The final verdict was expected from the Supreme Court of Ukraine, which was finally announced on December 3, “given the impossibility of publishing the official results of the second round of elections, a repeat vote shall be held on December 26, 2014.”

After 12 days of the Orange Revolution, the tension finally subsided, politicians began discussing changes in the electoral law, shifting the centre of power from the president to parliament and government, and revising the composition of the Central Election Commission. On December 8, as a result of the vote of the Verkhovna Rada, Ukraine turned into a parliamentary-presidential republic. And on December 26, as a result of re-elections, Viktor Yushchenko was elected the new president.

In 2004, Dmytro Potiekhin, Director of the European Strategy Group, coordinated the I Know! civil initiative:

The Orange Revolution temporarily balanced public sentiment. Moreover, the political elite began to listen to voters. However, this gave rise to the development of populism, which did not promote reforms. Further disenchantment of citizens with Viktor Yushchenko’s policies brought Viktor Yanukovych back to power. However, the latter’s cadence ended ahead of schedule as a result of the three-month Revolution of Dignity in 2013-2014.