The mission of the National Memorial Complex to the Heavenly Hundred Heroes and Revolution of Dignity Museum is to preserve, present and spread, in Ukraine and abroad, the history of Ukrainians struggle for national and personal freedom, dignity, human and civil rights, as well as revitalization of the public initiatives for establishing democratic society in Ukraine.

The mission is implemented via the following:

• Commemoration and preservation of memory about those affected by the clashes, as well as activists and protests participants.
• Colleting, studying, and popularizing of the testimonies about the events that took place during of the Revolution of Dignity.
• Conceptualizing the phenomenon of Maidan, as well as civil and political transformations and social innovations caused by it.
• Presentation and promotion of the knowledge about the struggle of Ukrainian people for their rights and dignity in the context of the world movement for freedom.
• Stimulating rethinking and awareness of universal and national values, identity, moral and spiritual challenges that were made relevant by the Revolution of Dignity.
• Stimulating critical thinking and innovative creativity.
• Supporting the establishment of the civil society in Ukraine, creation of democratic platforms, whose goal is to find the ways to develop and support the civil practices initiated by Maidan.

The Memorial and Museum Complex has to create a profound response to the challenges and possibilities to present and interpret significant national events. It is a modern place of a new type, a place of live stories and true testimonies, a repository of collective memory and a laboratory of its reinterpretation.

Strategic assets of the newly created Memorial and Museum Complex are focused on the interests and values of the citizens, since it is all about the memory that museum is trying to preserve, the people who are honored there, the collections, the ideas that are being generated, and the reputation that is being protected.

The Complex on the Heavenly Hundred Heroes Avenue will have three components: a memorial, a museum and an educational center.

It is our duty and the duty of all Ukrainians to keep the memory about the Heavenly Hundred alive, and to commemorate the people who lost their lives. As long as we remember them and why they perished, their sacrifice will not be in vain.  The entire territory of the Museum is the place where the Revolution of Dignity reached its peak. The Heavenly Hundred Memorial will be erected here as a focal point of glory and memory about each and every one of the Heroes.

Maidan Museum will become a “Museum about Freedom”, about the path towards it, as well as its protection. The future Museum’s exhibition space, its collection and archives will be filled with thousands of artefacts pertaining to the Revolution of Dignity and previous Maidans, as well as oral and documented testimonies, photos and videos. Value-based interpretation of exhibit items and phenomena will enable the visitors to receive not only the information but also impressions and experiences, it will evoke reflection and a search of personal answers.

Multipurpose cultural and educational center will preserve the memory about the struggle for human freedoms and rights, and will tell a story about the specifics of this struggle.  It will be an open dynamic platform for comprehension and popularization of the subject of freedom and the process of creating a state, civil society formation, public dialogue, reconciliation and consolidation. It will also be an educational center for responsible active citizens, who have to continue pursuing the goals set by Maidans.

Our vision of Maidan and Museum is conveyed in our logo: a square that transforms into a circle.

• From “sharp angles” to mutual understanding: it is a symbol of political, social and mental transformation and improvement.
• Focal Point: the Museum and Memorial of the Revolution of Dignity will appear at the very heart of historical events. Maidan have already been a central point of society and state’s renewal many times.
• Target: It reminds us about the threats to democracy, about the victims, who were defenseless in front of the firearms, about the conscious sacrifice for the sake of freedom.
• A drop in the ocean: an image that became popular during the Revolution of Dignity. It compares people with the ocean. Every community consists of separate human beings, just like the ocean consists of drops. Important social events resonate with people, just like the waves that ripple on water, when something falls into it.
• Independence Monument: from a bird’s eye view, the symbolic monument in the center of the capital looks like: a square pedestal, surrounded by a circle of steps. 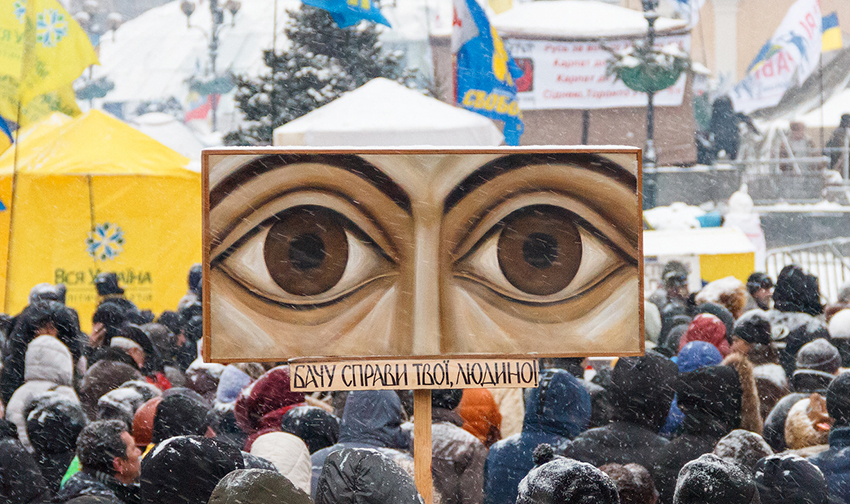