“Maydan” has become synonymous with the Ukrainian way to defend personal and civil freedoms against government tyranny and despotism.

Over the past 30 years, Ukraine’s main national movements were geographically centered on Independence Square in the heart of Kyiv, and were intellectually based on the notion of individual and collective freedom of choice, as a basic social value. 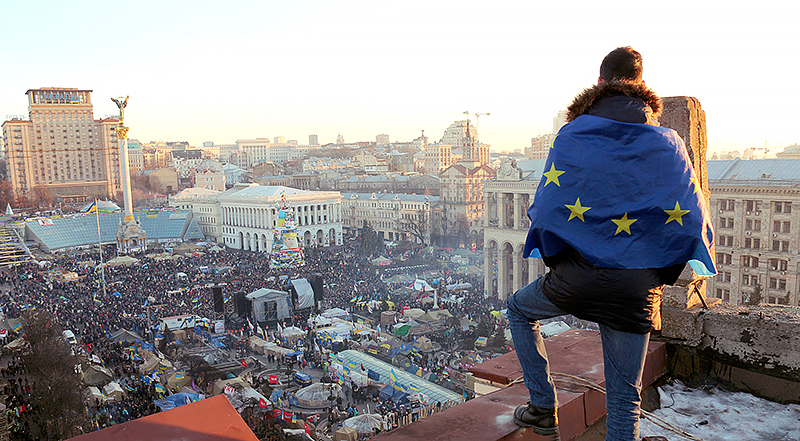 On November 21, 2013, 1500 people came to the central square to protest the fact that pro-Russian President Viktor Yanukovych had suddenly refused to sign the long-anticipated agreement on Ukraine's associate membership in the European Union - a document that embodied the nation’s European aspirations in the years following Independence. On the night of November 30, several hundred activists, mostly students who had continued to remain on the square, were brutally dispersed by the police. In response, on December 1, hundreds of thousands of people gathered in the center of Kyiv to protest the beatings. The tyrannical actions of the police were the catalyst for people outraged by corruption, usurpation of power, the regime’s Russification policy, and rapprochement with Russia.

Against a backdrop of Eurointegration slogans, the protest became known as the EuroMaydan. Eventually, the protest moved toward a complete reboot of the state system known as the Revolution of Dignity. The people demanded the punishment of the police responsible for brutally attacking the student protestors.

On the 61st day of the Maydan, the first two protestors were shot dead on the street. By that time, there were already two more dead further outside the area of confrontation. Throughout the following month, the authorities tried to force the protestors out of the city center. Most of the Heavenly Hundred heroes died of gunshot wounds on February 20, 2014.  107 victims of the Revolution of Dignity have been officially identified. On the night of February 22, 2014, President Yanukovich fled to Russia on a charter flight.

Tactically, the Euromaydan managed to force the dictator-president to flee and his government to resign. After elections, Ukraine chose a European vector of development. It became an EU associate member, its citizens attained the right to visa-free entry into the European Union, and as a result of the EU-Ukraine Free Trade Agreement, trade with European countries has significantly increased.

Strategically, the country turned its back on its past - the “Prison of Nations", as we commonly referred to the Soviet Union, and turned toward civilized nations.

Belgian Prime Minister Guy Vergofstadt called the EuroMaydan the largest pro-European demonstration in the history of the EU. This was the longest protest in recent memory, lasting uninterrupted for 92 days. In comparison, in 1989 demonstrations to overthrow the communist regime in the Czech Republic and Slovakia lasted 42 days. In Romania, protests which culminated in the execution of their dictator lasted 11 days.

For three months, thousands of people lived on the capital’s main square. The atmosphere of liberty and creative energy was destined to give birth to new movements and projects. The Maydan flourished with public initiatives, dozens of which are still functioning and growing. Maydan volunteers founded nationwide organizations and charitable foundations. The “Free University of the Maydan” offered free video courses on 30 topics. The "Maydan of Foreign Affairs" brought together veteran diplomats who became an influential advisory platform in the field of international relations. Many members of the improvised security groups "Self-defense of the Maydan" volunteered when, following the Maydan, Russia invaded Ukrainian territory. A number of these groups eventually became part of Ukraine’s Armed Forces. The "Office Hundred" launched projects such as restoring partially-destroyed documents from the residence of the ex-president, and now, for the sake of transparency and oversight,  they are digitizing millions of asset and income declarations of government officials. Babylon ‘13  studios filmed more than 150  short, and then full-length, documentary films. Now they are documenting life in post-Maydan Ukraine.

In the midst of the revolution, the historical significance of the events unfolding was clear. With that profound understanding of the necessity to preserve the memories and collect artifacts for future generations, two important initiatives took form following the Maydan -  the "Museum of the Maydan" and "Museum of Liberty". Their joint mission has resulted in the creation of the Heroes of the Heavenly Hundred National Memorial Complex - Museum of the Revolution of Dignity.