Registration for the patriotic run I RESPECT THE WARRIORS, I RUN FOR THE HEROES OF UKRAINE is now open 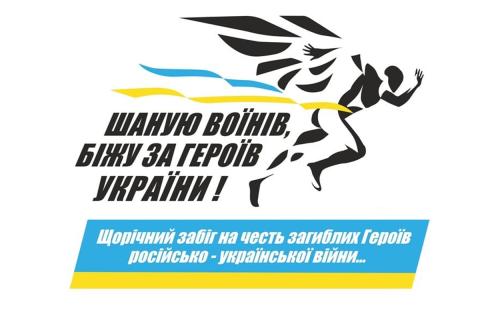 The patriotic run is an annual tradition, honoring the memory of fallen defenders. It is dedicated to August 29, the Day of Remembrance of the Defenders of Ukraine who died in the struggle for our independence, sovereignty, and territorial integrity.

This year, for safety reasons, the race will be held online.

From August 24 to September 25, every registered participant can run a distance of 2, 5, or 10 km for the hero and share his story on social media with the hashtags #RunForTheHero_2022 #Race2022.

When registering, you can specify the name of a hero whose memory you want to honor.

The race will happen not only in Ukraine but also in the USA, Poland, Lithuania, Germany, Sweden, Singapore, and other countries.

The kilometers we run together, are a gesture of remembrance of the courage and heroism of the participants of the Revolution of Dignity and the Russian-Ukrainian war. Our way of showing support for servicemen and families of heroes, and our expression of gratitude to them.

Registration for the race I respect the warriors, I run for the Heroes of Ukraine is open until September 19.

You can fill out the registration form by following the link or on the event website.

The race was initiated in 2018 by the father of the fallen hero of the Russian-Ukrainian war, ‘cyborg’ (defender of the Donetsk Airport) Oleksii Durmasenko.

Organizers and partners: Ministry of Veterans Affairs of Ukraine in cooperation with state institution Kyiv City Center for Assistance to Participants of Anti-Terrorist Operation, NGO Glorious Ages of Ukraine, the public association National Council for Sports Rehabilitation of Defenders of Ukraine, NGO United by War. 90th Battalion, the Kyiv City Palace of Veterans, the Commissioner of the President of Ukraine for the Rehabilitation of Combatants, the National Memorial Complex of the Heroes of the Heavenly Hundred - the Museum of the Revolution of Dignity, the NGO Association of Medics of the Revolution of Dignity, the NGO All-Ukrainian Association of Combatants, the advertising and production bureau Grzhabovskyi TM, the Center for Rehabilitation and Readaptation of ATO and OOS participants 'YARMIZ', the NGO Kyiv City Union of ATO Veterans of the Podil District, the Special Operations Forces of the Ukrainian Armed Forces and the World Federation of Ukrainian Medical Societies.