New media and revolutions of the new type in Ukraine and around the world: The academic forum

TOPIC 2021:
NEW MEDIA AND REVOLUTIONS OF THE NEW TYPE
IN UKRAINE AND AROUND THE WORLD

In the late twentieth century, after a wave of ‘velvet revolutions’, historians, political scientists, and sociologists launched discussions on a new type of revolution, or postmodern revolution, characterized by radical changes through negotiations between protesters and authorities. Nonviolent resistance and total people’s mobilization became a defining feature of such revolutions.

Further mediatization of society and role of social media, activated at the beginning of the twenty-first century, added the media factor to essential characteristics of the new revolution type. It was mediatization of social reality and emergence of so-called network society that led to the unprecedented influence of social media on development of protest movements for civil rights and freedoms. This was especially typical for post-Soviet countries with not strong democracies and corrupted hybrid regimes, such as Ukraine, Belarus, Georgia, Moldova, Kyrgyzstan, Armenia, as well as for Middle East and North Africa: Tunisia, Egypt, Turkey, Bahrain, Iran, Yemen, Lebanon.

In Ukraine, this new component of a modern revolution was most visible during the Euromaidan (Revolution of Dignity), when on November 21, 2013, a post, or rather a call for action, was made on Facebook, to protest against the authoritarian regime of Yanukovych and its scrapping the Association Agreement with the EU. After this, a wave of protests arose not only inside Ukraine but also worldwide among the Ukrainian diaspora. On the night of November 30, 2013, as peaceful protesters were brutally beaten by police, authorities jammed mobile communications on Independence Square in the capital. But news of the brutal behavior already spread like wildfire on social media and Internet resources, triggering new protests. By December 1, 2013, people across the country mobilized for termless protests.

Therefore, from the very beginning, digital media and social networks have become an important component of the Revolution of Dignity. The spread of new technologies and mass access to the Internet have turned them into an effective tool for mobilizing activists, organizing and coordinating protests. Mobile phones and access to social networks allowed protesters to receive and share information instantly, inside and outside the country.

The experience of Ukraine and other countries around the world, where revolutions have taken place in the last decade, has shown that the influence of digital communication technologies on a new type of revolutions has become a game-changer in the political field. The existence of social media and the blurring of boundaries between public and private, mass and interpersonal communication has allowed the media to have a direct impact, bypassing traditional media. This, in turn, has led to re-evaluation of their place in society and of professional standards in legacy media. On the other hand, the Internet and social media have become the largest data collection and tracking system in human history, creating new surveillance opportunities for authoritarian regimes.

The online part of postmodern revolutions has turned them into a specific object of academic research and prompted scientists in various fields, to find new research methods and develop a new methodological apparatus.

First, modern revolutions produce an original type of historical source. This requires new tools for verifying, classifying, and processing them, as well as poses a number of challenges to scientists when using these sources in research.

Secondly, media resources as a tool for organizing revolutionary movements have not yet become a subject of in-depth analysis. Suchlike research would give a clear understanding of the consequences—both positive and negative—of their use for society.

Third, it is clear that over the last decade, from the Arab Spring to the protests in Belarus, social media as an instrument of a new type of revolution has undergone transformations and should be explored in evolutionary and comparative aspects.

These problems will be considered and discussed at the third academic forum, which will focus on the role of communication technologies, especially social media, in the deployment and coordination of mass protest movements of the postmodern era and their specifics as a historical source and a socio-political phenomenon. 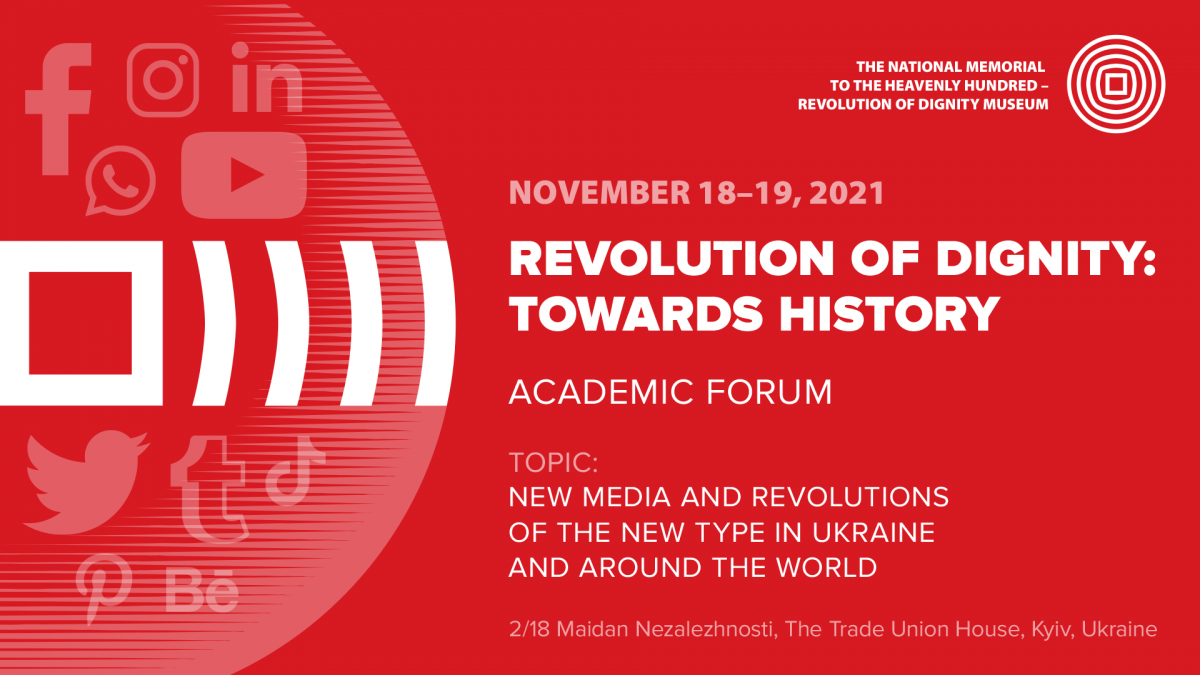 TOPIC OF THE FORUM:

The goal of this year forum is to analyse the role of social media in the development of protest movements in Ukraine, as well as other European countries, the United States, Asia, and North Africa; to discuss theoretical, methodological, and socio-political aspects for the correct and academically sound definition of this phenomenon; to promote an exchange of experience in the study of information and communication components of protest movements between Ukrainian and foreign experts; to introduce the topic of mediatization of Maidan into broader historical-informational and socio-political discourses.

THEMATIC AREAS OF THE FORUM:

Journalists, political scientists, historians, sociologists, philosophers, lawyers, cultural studies scholars, media and communication scholars, museum professionals and other researchers of the role social media play in protest / revolutionary movements of the new type in Ukraine and the postmodern world are invited to participate in the forum.

To participate, please send your application with a 300-word summary of a 15-minute presentation by September 30th, 2021.

The organizers reserve the right to select the proper applications and include them in the Forum program. (The program will be published before the beginning of the Academic Forum). The collection of research contributions based on forum results is planned to be published as well.

Applications not complying with the specified requirements and submitted after the deadline will not be accepted. There is no participation fee for the Forum. Travel, accommodation, meal expenses are not covered by the organizers.